During a recent expedition to the largely unexplored depths of the northern Mid-Atlantic Ridge, marine researchers stumbled upon something odd: tiny holes excavated in the sediment, all arranged in dozens of relatively straight lines.

Holes on the sea floor wouldn’t usually be too perplexing, but these were dotted in an incredibly neat and evenly spaced pattern. If not for the fact they’re located roughly 2.5 kilometers (1.6 miles) below the surface of the Atlantic Ocean, in the middle of nowhere, they could have been engineered by human hands.

Researchers on board the US National Oceanic and Atmospheric Administration (NOAA) vessel Okeanos Explorer used a robotic submersible to explore an underwater volcanic ridge north of the Azores archipelago, near mainland Portugal on July 23.

Now the NOAA researchers are asking for help from the public to figure out what the heck they just saw.

On Saturday’s #Okeanos dive, we saw several sublinear sets of holes in the seafloor. The origin of the holes has scientists stumped. The holes look human made, but the little piles of sediment around them suggest they were excavated by…something.

Roughly a week later, the researchers identified four more sets of the holes around 483 kilometers (300 miles) away, at 1.6 kilometers (1 mile) deep. 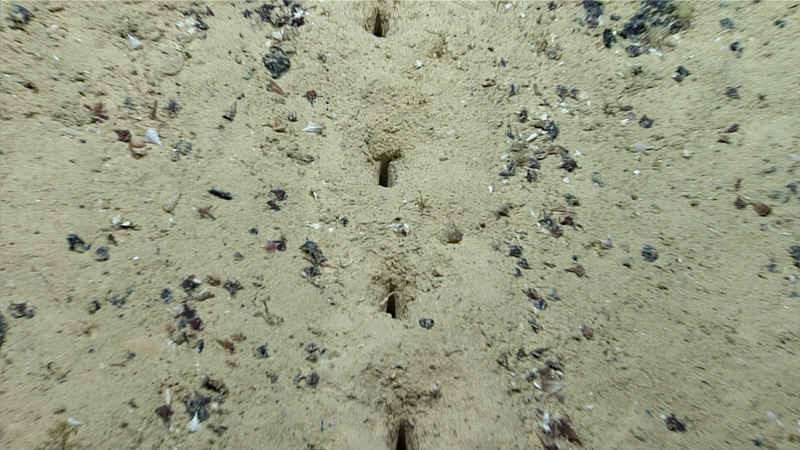 Close up of the holes. (NOAA)

“While the holes look almost human made, the little piles of sediment around them suggest they had been excavated. We attempted but were not able to take a peek into the holes and poke them with the tools on the remotely operated vehicle,” the NOAA wrote in a press release.

To add to the mystery, it’s not the first time scientists have seen holes like these. They’ve perplexed researchers for at least 20 years. A 2004 paper reported on a sighting in the same region that year. The researchers referred to them as “lebensspuren” to describe the holes, which translates to “life traces” in German.

“The source of the holes or how they were constructed is unknown, but the raised sediment may indicate excavation by an infaunal organism or digging and removal,” the authors wrote at the time.

“None of our closeups showed any sign of living organisms inhabiting the holes. Whether the holes were connected beneath the sediment surface was not visible.”

Since then, we haven’t found out much more about the holes, but it’s hoped that this mission may provide some answers. As a part of the recent expedition, the researchers were able to sample sediment from around the holes using the submersible’s suctioning device in the hopes it may shed light on whether or not something lives in there. Another view of the holes. (NOAA)

Having worked on both the recent exploration and the 2004 paper, NOAA deep-sea biologist Michael Vecchione has a vested interest in knowing what lurks below the Mid-Atlantic sands.

“There is something important going on there and we don’t know what it is,” Vecchione told Christine Chung from the New York Times.

“This highlights the fact that there are still mysteries out there.”

Covering an impressive 16,000 kilometers (10,000 miles), the Mid-Atlantic Ridge is the longest mountain range in the world – despite the fact that most of us have never laid eyes on it.

We don’t know much about the iconic region, which is why it’s the focus of NOAA’s Voyage to the Ridge 2022 expedition, from May to September 2022.

They’re also looking at the Charlie-Gibbs Fracture Zone, which interrupts the ridge, and the Azores Plateau, which is located to the east of the Mid-Atlantic Ridge and is where three major tectonic plates converge.

As you can imagine with all this activity, the Mid-Atlantic Ridge is an earthquake hotspot, and is also home to stunning hydrothermal vents where magma provides the heat used by life living at the extremes of the deep seafloor.

The Voyage to the Ridge 2022 missions hope to find out more about that life, including the source of the weird holes.

There’s one more dive schedule for this part of the expedition, which you can watch live on August 7.

Who knows what other mysteries are yet to be uncovered.